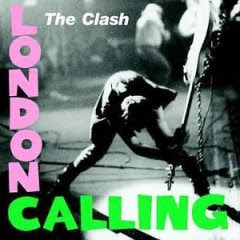 I mentioned the death of punk yesterday while talking about the Undertones, but there is a further reminder of the death of the movement here in this album, which is often touted as one of the best punk albums. Actually it is marginally punk, The Clash have moved somewhere else where reggae, ska, pop and punk intersect.

This is not a bad thing, I am not that much of a punk purist that this death-knell would annoy me in any way for that reason. There are good things here, The Clash show their ability to cover a very varied amount of music, the songs are actually pretty good.

Again, as it often happens the good bits are also some of the bad bits, the variety in the album makes it sound not very cohesive, it is still great but very dispersed, it sounds more like a compilation than an album, there is no particular conductive line through this, except the fact that they are recognizably Clash songs.

Still, this is a fun album, possibly more complex than the Undertones but sacrificing their very punkish simplicity.

The album was a double LP but sold for the price of a single one, which was the product of some record company duping by the band; they asked the record company if they could include a free 12" single with the album, and upon agreement from record executives, took it upon themselves to make the second disc a full length. This was one of the first showings of the band's anti-establishment/pro-listener position, as their mission was not to make money or please executives, but to get as much music out to Clash fans as possible.

Does an album really need to be cohesive? I think the crazy genre-hopping is sort of the point.

I agree that is the point, but that is not very successful, because they are not equally good in all genres.

Matthew said...
This comment has been removed by the author.
1:36 pm

The only song on the album I really can't stand is Lover's Rock.

I think all the others are fantastic songs, and they wouldn't really overreach until Sandinista!

I'm surprised none of Joe Strummer's work with the Mescaleros is on here, considering the list's massive hard-on for later-day comeback albums, and the warm reception of his posthumous album, Streetcore.

Streetcore's not the greatest album, but it definitely holds up against other overrated albums like Morrissey's You Are The Quarry, Springsteen's The Rising, or anything Dylan has done in the last 10 or so years.

This is a post-punk album. Their second record already showed the way they were going. "Let's play beyond punk"... it was a natural evolution. Not perfect but still great.

I only really brought it up because you leveled a similar complaint against Maggot Brain.