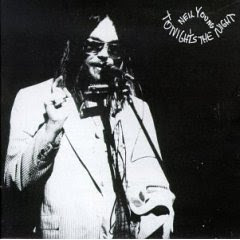 When On The Beach came out in 74 this album had already been recorded. When you listen to On The Beach the contrast with Young's previous albums is pretty big, but Tonight's The Night is the real transitional album which was only put out in 75 for reasons better known to the fucking record companies.

Young seems to have decided to do exactly the opposite of Harvest, his most successful album. There is not ornate prettiness here, Young stripped both the music and his voice down to the essentials while keeping his lyrical talent unscathed.

Ypung gives us a pared down version of his music, he isn't that worried about being a bit out of tune but with getting back to a "purer" sense of music and melody. This ends up being a great album, even if it isn't as immediate as his previous works, it puts On The Beach in its context and gives us a rounder picture of one of the best musicians of the 20th century. Young is making a much more bluesy, and on occasion even country influenced album here, and this has very much to do with the paring down of music to its essentials, an interesting experiment which also manages to make a great album.

Dark, heartfelt, and raw, Tonight's the Night was recorded in 1973 but initially rejected by Young's record company (a running theme in Young's career) as the second uncommercial release in a row and an unacceptable follow-up to his popular breakthrough, Harvest, and too stark a contrast with Young's work with Crosby, Stills, Nash and Young.

Young's album was a startlingly direct expression of grief: Crazy Horse guitarist Danny Whitten and Young's friend and roadie Bruce Berry had both died of drug overdoses in the months before the songs were written. The title track mentions Bruce Berry by name, while Whitten's guitar and vocal work highlight "Come On Baby, Let's Go Downtown", recorded live in 1970. (The song would later appear, in a different take, on a live album from the same concerts, Live at the Fillmore East.)

Lynyrd Skynyrd frontman Ronnie Van Zant was known for frequently appearing with a black shirt on, with this album cover pictured.