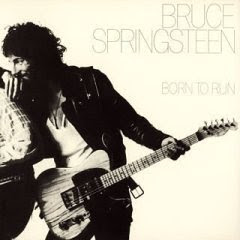 So here's the first entry by the Boss of us all, Springsteen. Actually I've never been a fan and I have had trouble understanding what all the hype was about, but after spending three days with this album I get it. It is pretty great stuff.

There is plenty you can criticise here, opening the door to the eventual emergece of Bon Jovi or the fact that it sometimes sounds like Dire Straits. But hey I have a certain love for Dire Straits... one of those things. But in the end Springsteen is just a very good musician and a great lyricist.

Springsteen is probably the best lyricist of the American urban working-class, his songs about escapism and cars, women and freedom are very much a thing which resonates with the urban working-class. This is not to mean that he is not a sensitive writer, in fact he is very sensitive, his songs have little images which are pretty great.

So I was very agreeably surprised by the Boss, his songs are epics which really deserve close attention and to be listened to more than once. So get this album.

The album is noted for its use of introductions to set the tone of each song (all of the record was composed on piano, not guitar), and for the Phil Spector-like "Wall of Sound" arrangements and production. Indeed, Springsteen has said that he wanted "Born to Run" to sound like "Roy Orbison singing Bob Dylan, produced by Spector."

In terms of the original LP's sequencing, Springsteen eventually adopted a "four corners" approach, as the songs beginning each side ("Thunder Road", "Born to Run") were uplifting odes to escape, while the songs ending each side ("Backstreets", "Jungleland") were sad epics of loss, betrayal, and defeat (Originally, he had planned to begin and end the album with alternative versions of "Thunder Road".)

Also, original pressings have "Meeting Across the River" billed as "The Heist." The original album cover has the title printed in a graffiti style font. These copies are very rare and considered to be the "holy grail" for Springsteen collectors.

My first exposure to Springsteen was his Born in the USA material, which continues to be played over and over again on most radio stations around here. The cheese factor of the production rally turned me off to him, considering him the king of a time-capsule style school of rock (Huey Lewis is the court jester).

Eventually, however, I heard Thunder Road and ran out to grab this album. It really is incredible. Hard to believe a man that could build so much tension and excitement while painting such captivating pictures with his lyrics would later go on to write such trite songs.

Born In The USA is also one of the most spectacularly misused albums in the history of mankind... but yes it doesn't sound very different from his 1975 work, except for the fact that it is crap. That's the 80's effect for you. Look at Stevie Wonder