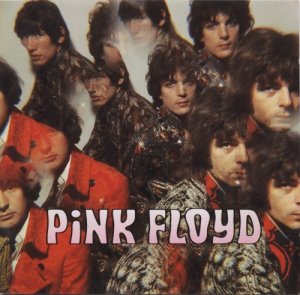 All this might be attributable to Syd Barret's rapidly sliding sanity and copious usage of LSD, a bad LSD trip lurks behind all the fairytale imagery. And that decadent, repressed dementia is what makes this such a good album. Ok, it is not an easy album to listen to, in fact it is quite demanding on tracks like Interstellar Overdrive but it does pay off.

Overdrive has one of the coolest guitar riffs to be commited to vinyl; pity that between it's first and last appearance on the track there's 7 minutes where the mask of sanity has slipped and noise takes over. Pink Floyd sound like nothing else at this time. It does have its downsides, however, some of the more narrative songs seem a bit out of place, and I really prefer the more instrumental/spacy tracks. Honestly I think it is a good thing Barrett left, letting Pink Floyd explore those sounds on Dark Side Of The Moon for example.

I know I will go to hell for this, but Syd was overrated and I am more of a Roger Waters man myself. David Gilmour can go screw himself however (sorry Gilly, you know I love you). Stream it from Napster or buy it at Amazon UK or US.

The album's title comes from the title of the seventh chapter of Kenneth Grahame's The Wind in the Willows, where Water Rat and Mole, while searching for a lost animal, have a spiritual experience. "This is the place of my song-dream, the place the music played to me," whispered the Rat, as if in a trance. "Here, in this holy place, here if anywhere, surely we shall find Him!". The Piper referred to is the Greek god Pan. Vic Singh photographed and designed the album cover, unlike subsequent Pink Floyd albums.
Posted by Francisco Silva at Thursday, September 14, 2006

I really like Pink Floyd. They are easily in the list of my top 10 favorite bands of all time. What a shame this – their debut album - is just not very good. Indeed – the Pink Floyd that I’m referring to would be the group AFTER Syd Barrett lost his mind and was replaced by David Gilmour. We can thank Syd for putting the band together if nothing else – but the Floyd would not make great music until he was long gone from the group. This record DOES capture the psychedelic mood of the 60’s pretty well, but it’s just to ‘out there’ as it were. The lp title was taken from Syd Barrett's favorite children's book, “The Wind in the Willows”, and Barrett’s lyrics are indeed childlike, but more accurately LSD influenced.
I have played this record a handful of times over the years since I got it as a teenager and thought perhaps a new current listen to the record and my changing music tastes may have altered my opinion of the record. But not really. "Astronomy Domine" and "Interstellar Overdrive" are really the only tracks that I really enjoyed – and I really believe that is due to later versions of the songs that I have listened to which makes they more familiar to me. As an interesting side note. the album was produced by Norman Smith, an EMI staff member who had previously engineered all of The Beatles recordings up to 1965's Rubber Soul.
I have always held the opinion that Syd Barrett has always been somewhat overrated. His story is no doubt a sad one, but his Floyd work as well as his solo released are pretty much un-listenable. Regardless of my opinion, the record has been called one of the most influential records ever made. It reached #6 on the UK charts. In the U.S. it reached #131 on the Billboard charts. In 1999 Rolling Stone Magazine called it - "the golden achievement of Syd Barrett". Q Magazine described the album as "indispensable", and included it in their best psychedelic albums of all time. It was also ranked 40th in Mojo magazines, The 50 Most Out There Albums of all Time. In 2000 Q magazine ranked it at number 55 in its list of the 100 Greatest British Albums Ever. In 2003, the album was ranked number 347 on Rolling Stone magazine's list of the 500 greatest albums of all time.
Regardless of all of that - I cannot however recommend it.