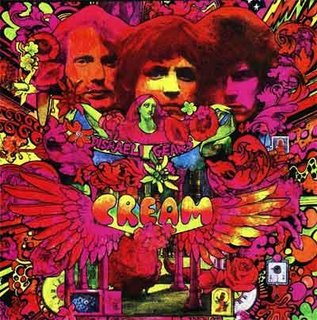 Rock, baby, yeah! Ok, you are bound to know this album even if just the riff from Sunshine Of Your Love, probably one of the most famous rock guitar riffs ever. While that song is possibly a bit overplayed and sounds a bit silly now (not helped by being used as a basis for Spinal Tap's Big Bottom) the rest of the album is actually pretty good.

Another thing which adds to the overall tackiness level is Mr. Eric Clapton, who was at the time actually quite good instead of the purveyor of Wonderful Tonight style ditties. Yeah, it's a pretty good album and there are some hidden gems here which are really worth listening to. And if Giles (in the Buffy episode where old people become young, he listens to Tales of Brave Ulysses while smoking a J) likes it, then so do I!

Clapton was really a guitar genius, but lyrically this is also a pretty good album, going from the poetic in Ulysses to the really quite funny in Mother's Lament, which although a traditional song is an inspired choice for the end of the album, and is played with a particularly funny attitude. Ulysses is actually written by the cover artist, and this album definitely has one of the trippiest covers ever to hit the shelves. Me likes.

Still the album has dated quite a bit and at times sounds like a caricature of psychadelic 60's rock and maybe even a bit cliched, but that is just a sign of how era defining the album is. You can stream it from Napster or buy it at Amazon UK or US.

1. Tales Of Brave Ulysses
2. Sunshine of Your Love
3. Dance The Night Away
4. Mother's Lament

When Cream played the Royal Albert Hall in 1968 as their final shows, Clapton became the first person ever to smoke a cigarette on its stage.

The Girlfriend just pointed out to me that Giles is listening to Ulysses with Buffy's mother, Joyce. Oooooh.

Just a fantastic album – and most likely Cream’s best. Teamed up with producer Felix Pappalardi – this is Cream’s second record. It’s less blues and more psychedelic oriented than their debut lp - but it does show them as a truly massive, innovative power trio. The record contains the classics "Strange Brew" and "Sunshine of Your Love," as well as the epic “Tales of Brave Ulysses." These tracks alone make this record a classic.
There are some interesting tracks suck as "Swlabr," and the schoolboy singalong "Monther's Lament," yet make no mistake, Cream is a heavy rock trio and “Disraeli Gears” is a great heavy rock album of the '60s – once again affirming that Eric Clapton was really a guitar genius. Clapton, Ginger Baker, and Jack Bruce all contributed songs to the record with the help of lyricist Pete Brown and Pappalardi.
The record upon it’s release reached #5 on the UK album chart, and it was also a massive seller in the US reaching #4 on the American charts. In 2003 the album was ranked number 112 on Rolling Stone magazine's list of the 500 Greatest Albums of All Time. VH1 also named it their 87th greatest album of all time the same year.
It is highly recommended.