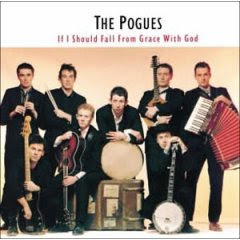 1. If I Should Fall From Grace With God
2. Turkish Song Of The Damned
3. Bottle Of Smoke
4. Fairytale Of New York
5. Metropolis
6. Thousands Are Sailing
7. South Australia
8. Fiesta
9. Medley: The Recruiting Sergeant/The Rocky Road To Dublin/Galway Races
10. Lullaby Of London
11. The Battle March Medley
12. Sit Down By The Fire
13. The Broad Majestic Shannon
14. Worms

I just love the Pogues, few bands are able to create such chaotic, boisterous and infectious music, it is hard not to tap your feet along to so many of the tracks here. But then you have to love them for a lot more than that. For their lyrics, experimentalism and the variety of music, particularly in this album.

This is not as an explosive album as Rum, Sodomy and the Lash, it is slightly more subdued and more slickly produced, yet it still has the edge necessary for the big stomping numbers, while allowing the Pogues to make more delicate music.

This album also contains what has repeatedly been voted as the best Christmas Song by UK audiences, and Fairytale of New York is certainly that. A bitter-sweet Christmas Song and the Pogues' biggest hit, but to focus on that single track would be to do this album a disservice, there is not one bad or average song here, it is all brilliant. Indispensable.

1. Fairytale of New York
2. Thousands Are Sailing
3. Fiesta
4. Turkish Song Of The Damned

The album was a departure from previous Pogues albums, which had focused on an Irish folk/punk hybrid, combining musical radicalism with strong commercial appeal. On If I Should Fall From Grace with God several more genres were added to this mixture, including Jazz, Spanish folk and Middle Eastern folk. The adding of Spanish and Middle Eastern sounds was a sign of things to come; on later albums such as 1990's Hell's Ditch these would become the defining sound. However on this album it was very much Irish folk to the fore, especially on songs such as the title track, "Bottle of Smoke", "South Australia", "Lullaby of London" and "Sit Down By The Fire", and the rendition of the traditional jig "The Lark in the Morning" as the coda to "Turkish Song Of The Damned". These songs were more typical of the earlier Pogues albums, mostly fast and heavily textured. The album was also the first by the band to utilize a complete drum kit.

Also prominent on the album were the ballads "Thousands are Sailing", "The Broad Majestic Shannon" and especially the Christmas hit, a duet with Kirsty MacColl, "Fairytale of New York". "Streets of Sorrow/Birmingham Six" showed a passionate and angry political side to their music, the first part being about the sorrow a person feels about the streets of Northern Ireland, and the second half about the Birmingham Six and the Guildford Four, two groups of people wrongly imprisoned for terrorism offences and held in jail despite evidence showing they had not committed the crimes. The song also makes a passing reference to the Loughgall Martyrs with the line "while over in Ireland eight more men lay dead, kicked down and shot in the back of the head".