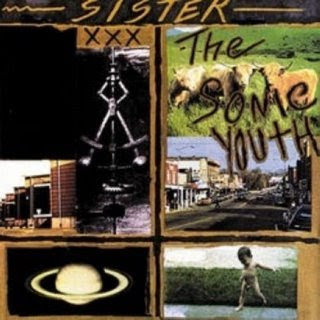 Very few band know how to use noise to a level of perfection, one of them is Pere Ubu, another one is Sonic Youth. Making feedback and distortion an integral part of the music that does not just work but actually enhances the musical experience is a feat that when it is pulled off to this level I really enjoy. Not enough bands do it, and those that do, do it wrong.

The qualitative jump from Evol to sister is marked, there is a slight shift towards more conventional song structure, but not enough to ruin the music in any way, just making it the right notch of accessibility to lead this album to near perfection.

If there is a problem that I can point to in this album, it is the fact that some songs are so superlatively good that others kind of pale in comparison. But even the less amazing songs here are still amazing enough. An essential album.

1. Schizophrenia
2. I Got A Catholic Block
3. Hot Wire My Heart
4. Kotton Krown

The black area on the front cover was originally the photograph "Sandra Bennett, twelve year old, Rocky Ford, Colorado, August 23, 1980" taken by Richard Avedon, but was removed after the threat of a lawsuit. At first the picture was merely covered up with a black sticker, but on later pressings, it was deleted. The same was done with a photo of Disney's Magic Kingdom on the back cover. Very early promotional posters and pressings of the album do feature these photos, but later ones do not.