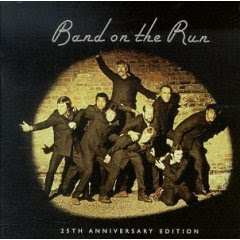 This is one of those album that if it wasn't for the fact that it has Paul McCartney written on the cover would never have made the list. Frankly it is a pile of shit. There are actually some things that this album has in common with my beloved Abbey Road, but while Paul had John and George to rein in his tackiness, nothing saves him here.

I don't understand how the myth of Paul McCartney as one of the greats in the Beatles ever arose. Frankly he is just a bit above Ringo in my consideration, and at least Ringo never inflicted the pain that Paul's solo career has inflicted on us. This album is a collection of loosely related pop tracks, that like many shit pop tracks manage to be catchy while still being crap. You know that feeling of having a song in your head that you hate but can't lose? That's what this album does to you.

I might be being a little too harsh on the album, there are a couple of songs that i don't mind. Mamunia is a good track for example, if only the lyrics weren't so fucking pedestrian. Paul and Linda were mugged in Nigeria while recording this album, a pity they weren't killed also, it would have saved us a lot of grief, vegetarian meals and Mull Of Kintyre. A lost opportunity for a better world. Fortunately he is not coming back to the list or my ears. Get it if you must at Amazon UK

The cover of Band on the Run is also noteworthy. Shot on 28 October 1973, it depicts the now well-known shot of Paul, Linda, and Denny plus six other celebrities dressed as convicts caught in the spotlight of a prison searchlight. They are: Michael Parkinson (journalist and UK chat-show host), Kenny Lynch (singer, actor and comedian), James Coburn (Hollywood actor), Clement Freud (gourmet, raconteur, Member of Parliament, Just a Minute panellist and grandson of Sigmund), Christopher Lee (UK actor, best known for roles in horror films and as Saruman in the Lord Of The Rings trilogy) and John Conteh (Liverpool boxer who later became World Light-Heavyweight champion). The picture was taken against a garden wall in Osterley Park, Brentford. References to the cover were to be made later by McCartney himself (in the video for "Spies Like Us", along with Chevy Chase and Dan Aykroyd) as well as others (such as the movie poster for the Dreamworks' animated film Madagascar, which depicts the main characters standing against a wall in a pose similar to the original "Band on the Run").

Even his fucking hair is annoying, Jet:

I agree 100% here. I can appreciate the Beatles' stuff but I always thought it was a bit overated. I think they were just the right band at the right time more than anything else. I don't rate the solo stuff of McCartney at all. It is no surprise that Alan Partridge sings "Jet".

hehe It is a very Alan Partridge album

I've been listening to this album this week. But before I jump into my comments on it, I need to address the previous comments from shu...even though I know shu will never see them because this post is so old...but hey, can't hurt.

But since they were one of the greatest musical acts ever -- and there are #1 records and songs, the respect of critics and musicians, and great music to prove this -- they really can't be overrated.

On a different subject -- and maybe you can answer this question for me, Francisco -- who is Alan Partridge?

P.S. I will try not to fill your comments board with duplicate entries this time. I figured out (finally) that it was reposting every time I was hitting the back button on my browser.

Regarding "Band On The Run"...

Yeah I basically agree with you on this album, and on Paul McCartney's solo career in general. Aside from "Maybe I'm Amazed" and "Live and Let Die", I don't think Paul has delivered a Beatle-quality song since the split.

As far as the "myth" of Paul McCartney as one of the greats in the Beatles, I don't think it was a myth. I think the guy has tremendous talent, pre- and post-Beatles, for coming up with melodic, catchy tunes; however, his talent really needed to be processed within the Beatles in order to make the songs work. The comment you made about needing "John and George to rein in his tackiness" is right on the money.

Anyway, it was nice to see someone else share my opinion that "Band On The Run" is definitely not the great record that so many people think it is. I liked it more than you did, but not much more.

He is a character from a British comedy show, he's a shit local radio DJ basically:

here's a link of where he talks about Wings.