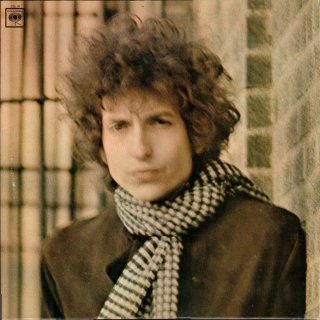 1. Rainy Day Women #12 & 35
2. Pledging My Time
3. Visions Of Johanna
4. One Of Us Must Know (Sooner Or Later)
5. I Want You
6. Stuck Inside Of Mobile With The Memphis Blues Again
7. Leopard-Skin Pill-Box Hat
8. Just Like A Woman
9. Most Likely You Go Your Way (And I'll Go Mine)
10. Temporary Like Achilles
11. Absolutely Sweet Marie
12. Fourth Time Around
13. Obviously Five Believers
14. Sad-Eyed Lady Of The Lowlands

Bob Dylan is a sexy, sexy man. You might dispute this opinion, but you are wrong. The guy was a fucking genius, Blonde on Blonde sees him taking Highway 61 Revisited and propelling it to the natural conclusion of an all electric album. And what an album. Firstly it's a double album, 70 minutes long for a rock album is something very new, so new this is the first one. And then this man is a poet, not a regular one at that, but a very good one. I would say that only Leonard Cohen comes close to him in lyrical talent in modern music, and even still... very different kettle of fish.

If these two things were the only good things about Blonde on Blonde this would still be one of the best albums ever. But they aren't. This is a musically beautifull thing. It's actually hard to choose my favourite songs here, they change each time I listen to the album, some take center stage, some move back and next time I listen to it it might change again. It all depends on my mood. It is a vast enough album that it's able to do that. There are a couple of songs that never leap out at me that much, like Pledging My Time. They are however still good, actually very good. The problem with this album is that it's filled with superlative songs, and the very good just seem to be drowned out.

I wouldn't call it the perfect album, but it is damn near. There is a sequence of songs near the beggining that are just amazing. From Visions of Johanna to Stuck Inside Of Mobile With The Memphis Blues Again you can't catch your breath. And then it finishes with what is probably one of the most beautiful of all Dylan songs Sad-Eyed Lady Of The Lowlands and this man can do no wrong. Even the instrumentation is amazing, the rising pianos in One of Us Must Know (Sooner or Later) leading to the chorus are a great experience.

Oh, just listen to it. Stream from Napster or buy at Amazon UK

Sophie's Fucking Choice on a Plane!

BARRY
That is perverse. Do not tell
anyone you don't own fucking Blonde
on Blonde. What about Television?

CUSTOMER
I have a television.

Final version, not as funny:

Barry: Don't tell anyone you don't own "Blonde on Blonde". It's gonna be okay.
Posted by Francisco Silva at Thursday, July 13, 2006

anyone who don't like Dylan is a sucker, dumb-ass, and a douche-bag.

whatever good music you listen, you're listening to Dylan.


even though the previous musicians before Dylan never live to know Dylan.

you're still into Dylan

too bad that neither John Wesley Harding nor Nashville Skyline were including in this list!