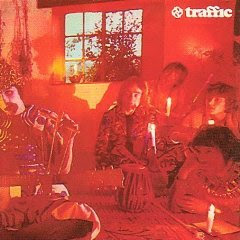 Well this isn't as good as John Barleycorn Must Die and not as bad as Steve Winwood's solo career. Actually it is more on the side of the greatness of Barleycorn than the shittiness of Winwood's career.

It is a pretty much hit and miss album, some of the tracks are really nifty, such as the title track, while others sound like sub-par hippie psych, Utterly Simple being an example of this.

Overall, however, it is a pretty solid album, but one which will hardly Wow any new listeners. The essential Traffic album is still John Barleycorn Must Die, and it will always be that one. Close but no cigar.

Considered by far the strangest and most art rock style album that Traffic released, Mr. Fantasy didn't gain much more than a cult following for Traffic at the time. Critics seemed to like the album, though, and most said it was clear that Steve Winwood and Traffic were good at putting together semi-mainstream psychedelic rock, except this album was not quite mainstream enough. By their next release, the eponymous Traffic, the band was said to have worked through that.

There's some configuration fuckin up with your blog. The archive pages just show up 20 albuns and the other ones simply "doesn't exist anymore".

The other pages are all over the same.