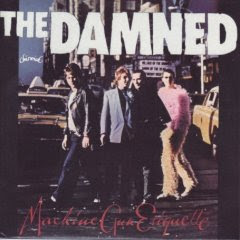 Ahh The Damned, it isn't apparent form the list but they were the first British band to have a Punk single, so they have been around by the time this album came out. Actually the punk is here but so is something else, a darkness and musicality more associated with gothy post-punk and even pop and a smattering of Psychadelia.

This is definitely a good thing, and all the tracks here fall into slightly different fields, making this a pretty varied but still consistent album. It is consistent in the quality but also in the overall feel of the thing. It is dark and oppressive but this is Thatcherite Britain so it is just a mirror to society. Actually in the times to come we will see very much the two poles of depression and escapism coming out of the UK as we start going into the 80's.

This album is great, one of the links between punk and the 80's gothy post-punk this album has feet planted firmly in both fields making it an interesting thing. It is actually poppier than Siouxsie for example, never reaching their level of depression and bleakness and being able to see some of the fun behind the darkness. Get it.

The original vinyl's lead-out groove contained a sound clip ("Nibbled to death by an okapi") that was intended to loop indefinitely until the listener removed the needle from the vinyl (like the lead-out groove on Sergeant Pepper). The sound clip was a line from the BBC Radio series Hitchhiker's Guide to the Galaxy, spoken by Peter Jones, about the fate of Arthur Dent's brother

Smash It Up (II) and I Just Can't Be Happy Today:

Hey - this comment has nothing to do with The Damned (except I could say that they were also the first British punk band to release an album too).

I watched BBC4's excellent series Brasil Brasil and wondered if you could recommend 10 albums not on this list that - for you - reflect Brasilian or Portuguese music better than stuff like the Elis Regina compilation here. I guess Ceatona's Tropicalia would still be there as would the Milton Nascamento album but what else? Cheers.

PS - the book editors missed a trick by putting an extra album between Pink Floyd and Michael Jackson: The Wall, followed by Off The Wall would have been quite amusing.

there's a great album by soul jazz records called: The Sexual Life of the Savages (Post Punk from Sao Paulo) which is pretty amazing.

I also love Seu Jorge, and not just the life aquatic soundtrack, i really like his album before - Cru.

Lanark: There's some album here on the list which deserve inclusion and those are:

Thne there is one which will be here in the future:

And then we need 5 more which aren't here, I would recommend:

and for a new artist:

So that was Brazil...

Cheers for that - I'll seek those out.

I was the one talking about Salsa music around the Willie Colon Siembra entry.

What will you do with yourself when you've got through all 1001 albums?