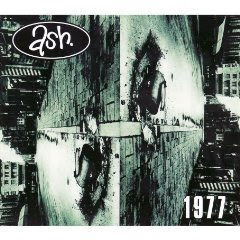 I have very mixed feelings about this album. It starts out great, with a Tie-Fighter sample, geek that I am, to the point of knowing that Tie means Twin Ion Engine, it pulled my heart-strings right there. After this it kicks in to some pretty great guitars, with a fat sound that I really like.

The downside came after this, I just really don't like the singer's voice. It sounds too bratty here, something that brings to mind teen-rock bands which annoy the crap out of me.

Therefore I like the music but dislike the voice, making this an album which in the end I will not want to listen to again that much. The slower the track the more noticeable the voice is, so I quite liked the heavier stuff. But meh.

The name is a reference to year of three events which shaped the band - the births of two members of the band, the year Star Wars Episode IV: A New Hope was released, and the year the first punk albums were released, though it has been suspected that the Star Wars reference is the most important; the album opens with the sound of a TIE Fighter, and ends with the track "Darkside Lightside", whose title is a Star Wars reference, and which also ends with a choral version of the Star Wars main theme. The band have also covered "Cantina Band", on the "Girl From Mars" b-side.

The only song I know from this is "Girl from Mars", which I suppose was a pretty big hit and which I liked well enough. Is the rest of the album much in the same vein?

Ash reformed recently, or broke-up, or something. The main thing that struck me about it was that someone cared enough about Ash for the radio station I listen to to make a deal of it. It's like when you find-out that a one-hit wonder from the 70s has had a long and prosperous career touring the stadiums of the Balkans.

H0LY CRAP that Lose Control song was on Gran Turismo soundtrack if i remember correctly! Totally getting this album now.

what the fuck is up with the hidden track?

Tom: Yeah, they were popular in the UK before my time.

Lachlan: Yes it was!

Anon: Yeah forgot to mention that, as you can imagine I only listened to that once, skipped it every other time.

So I rolled back to see what your Weezer's Blue Album was and i was surprised to see it is not in the list...